Can you imagine the “terrible twos” being even more… terrible?  Some toddlers will become so angry in response to being told “No”, that they hold their breath to the point of turning blue, passing out, and even having a few muscle jerks that look like a seizure. Talk about inducing parental guilt!

However, these episodes, called breath-holding spells, are a natural reflex experienced by some infants and toddlers, and—while certainly scary to watch—shouldn’t be a cause for alarm, or guilt.

When do they happen?

Starting as early as age 6 months, peaking in incidence around two years of age, and resolving by 6 years of age, breath-holding spells occur in about 5% of all children. They are typically triggered by anger, pain, or fear, after which the child gives one or two cries and then holds their breath on exhale until turning blue or pale and losing consciousness. Once that happens, other parts of the brain can take over and stimulate breathing. Normal breathing typically returns after less than a minute, and children return to their normal selves within two minutes. Even though the episodes have triggers, the breath-holding spell is unintentional.

If your child experiences a breath-holding spell, the first thing to remember is to breathe yourself. You can’t be helpful for your child if your own brain isn’t getting enough oxygen!

Remind yourself that the episode is likely to be over within a minute. Lay your child on the floor and on their side. Remain next to them until the spell ends.

Once your child has recovered, avoid punishing or rewarding them. Because the spells are a reflex, punishment won’t prevent them from happening again. Rewarding them, however, has been known to create situations where the episodes recur more frequently. And “giving in” to avoid upsetting children in the first place can often lead to behavior problems in the future that persist long after children outgrow the breath-holding spells themselves.

Get emergency help if needed

Assuming your child returns to normal within the two-minute time frame, you should call our offices during regular hours after your child experiences their first episode. In consultation with you, we can help make sure that the episode was a typical breath-holding spell and discuss if any additional testing is required.

Can breath-holding spells be prevented?

While you can’t really prevent the breath-holding itself, you may be able to avoid some things that trigger it. Try giving your children a “five-minute warning” before transitioning from one activity to another. Infants sometimes will take a breath when an adult blows in their face. Toddlers may abort a tantrum when they are asked a question. And as older children learn to recognize and label their emotions, they may not progress to holding their breath if they’re able to tell you what they’re feeling.

Hopefully, your household doesn’t ever have to experience an episode as scary as these can seem. But with courage and a couple of deep breaths, you can learn to make it through, even if you do. 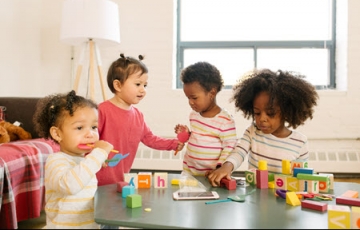 Hand, foot, and mouth disease is a common childhood illness characterized by a blistering rash. It is caused by the…
Learn More
March 4, 2021

Caring for a Baby with Colic

Being a new parent is challenging. The added challenge of a fussy or colicky baby makes parenthood even more difficult,…
Learn More