Vaping: What Teens and Parents Should Know

E-cigarette use among youth in the U.S. has increased dramatically during the past decade. In 2020, about 1 in 5 high school students and 1 in 20 middle school students reported having used e‑cigarettes in the past 30 days.

E-cigarettes are electronic devices that allow the user to inhale nicotine, a.k.a. Electronic Nicotine Delivery Systems (ENDS).  They are known by many names and come in many shapes and sizes. Some common names and brands include: JUUL, vape pens, e-cigs, e-hookah, and MODS. They can look like traditional cigarettes, cigars, or pipes, or they can resemble other objects like flash drives/USB sticks or pens. The “e‑juice” used to fill them can also come in a variety of flavors, making them particularly enticing to youth.

You may have heard of kids sneaking e‑cigarettes like JUUL into school classrooms. JUUL is one of the most popular brands of e‑cigarettes. They are shaped like a long, thin USB memory stick and can be charged in a computer. Their appearance can, unfortunately, make them easy for teenagers to hide.

JUUL always contains high levels of nicotine—one standard JUUL pod contains as much nicotine as a pack of 20 regular cigarettes! The use of nicotine salts allows the user to inhale high amounts of nicotine with less throat irritation than with traditional cigarettes. 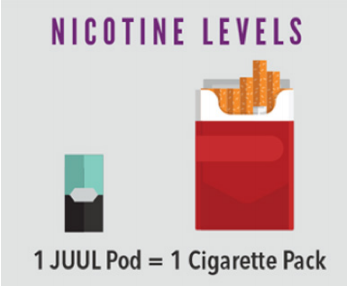 How do e-cigarettes work?

A heating unit in the e‑cigarette turns the liquid into an aerosol of tiny particles that someone then inhales. Contrary to common belief, this aerosol is not harmless water vapor. It can contain many harmful substances.

What is in an e-cigarette?

About 99% of e‑cigarettes contain nicotine at varying levels. Some products that have claimed to be nicotine-free, have later been found to contain nicotine. Nicotine is the highly addictive chemical that is also found in regular cigarettes. Teenage brains are particularly susceptible to nicotine addiction. If teenagers use nicotine products, it has been shown to harm brain development and can lead to learning, attention, and behavioral problems.

The rest of the liquid in an e‑cigarette contains a variety of additives. Some include formaldehyde and other volatile organic compounds, flavoring chemicals, anti‑freeze (propylene glycol), and nitrosamines, amongst others.

Many of these chemicals are known to cause:

E-cigarettes are also a potential source of heavy metals such as nickel, tin, and lead, which have been found in the aerosol and the tanks that hold the e‑liquid.

What is in e-cigarette aerosol?, Source: CDC

What are some other risks?

E-cigarettes are a newer product, so we are likely to learn more information about long-term health effects in the future. Here are some of the risks we are aware of:

A gateway to addiction

Nicotine is very toxic, even in small amounts. National poison control centers receive thousands of calls every year related to liquid nicotine exposure. Toxic exposure can occur when e‑liquid is swallowed or exposed to the skin. Smaller children, who may be attracted to flavors or packaging, are at the highest risk. According to the American Academy of Pediatrics: “A teaspoon of concentrated liquid nicotine can be fatal for the average 26-pound toddler.”

Additives or flavorings that can be safe to eat may be damaging to the lungs when inhaled. A lung injury outbreak associated with e‑cigarettes resulted in over 2,800 hospitalizations and 68 deaths since February 2020. This outbreak was linked to the use of Vitamin E acetate as an additive. There may be long-term effects from other additives or flavorings that are yet to be seen.

What are some reasons that a teen might try an e‑cigarette?

A teen might be more likely to try an e-cigarette if they:

If a parent vapes, how can this affect kids who might be exposed?

There is still a lot of research that needs to be done about second-hand exposure to e-cigarette aerosols. Since there are cancer-causing chemicals in the aerosol particles, it is possible that exposure to second-hand vaping may be damaging to a child’s health. Parents should never use e‑cigarettes in the house, in the car, or in any other enclosed location where their child spends time.

For more information or if you need help quitting e‑cigarettes, visit teen.smokefree.gov.

People with insomnia have difficulty falling asleep or staying asleep, despite the opportunity to do so. It is quite common…
Learn More
March 10, 2022

We recently began offering the Nexplanon birth control implant at Pediatrics Northwest. If you are interested in this option for…
Learn More